This is not going to sound exciting, but it’s the truth nonetheless. Slow days do exist for cam models. There are thousands of webcam models out there dealing with lull periods and a few have contacted me via my site to get more info on this. They want to know if this is the norm and if they’re doomed. Before you give up, understand that you’re not the only one! Slow days are a real thing, but they are able to overcome. Here’s what you need to know… 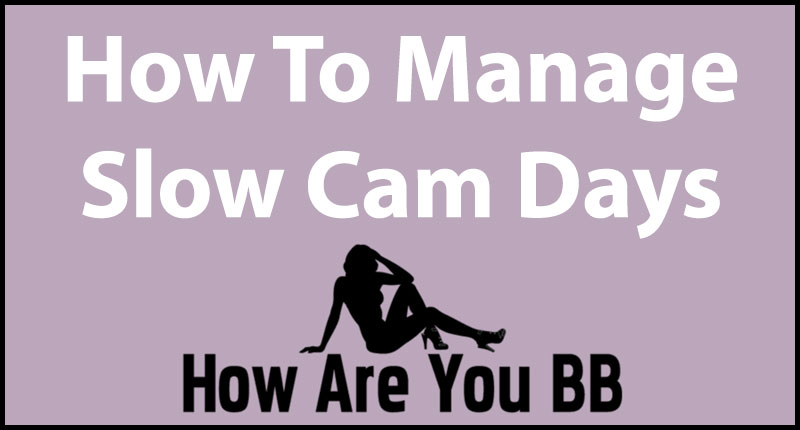 How To Overcome Slow Cam Days

Everyone has slow cam days and they’re a huge pain. No one ever wants to log onto their cam to just sit there by themselves. Camming relies on people watching and interacting with you. Being able to cam as a job relies on making money. Both of those things need people around to make it happen.

It doesn’t matter how much work or effort you put into getting people into your room. You’re still going to have slow days that will make you question whether or not camming is really for you after all. When those slow days come, you just have to suffer through it and make every single viewer that you have count.

There are a few different traps that you can fall into when it’s slow in your room and they need to be avoided at all costs. No matter how slow it is, there are still going to be a few people filing in and out of your room.

The very first thing that you have to do is pretend that you’re having a good time. It’s not that easy, but it’s still possible. When the room is totally empty except for one or two beggars, just make the most out of it. Keep a smile on your face and pretend that you’re enjoying yourself.

No one wants to spend any time in a room with a girl who clearly wants to be in other places. You have to pretend that every single day is a good one. Talk and interact with people. Make jokes. Do your best to show them that you’re worth their time.

They could also be the only people who tip you on that entire slow day. Just put on a smile and be the cam girl that you want to be.

Stay Off Your Phone

While you’re on cam for your slow day, stay the hell off your phone. No one in their right mind wants to be in a room with someone who’s ignoring them to talk to someone else who’s not trying to decide whether or not to give her money.

It doesn’t matter how slow things get. Taking out your phone and ignoring the few viewers that you have is showing them how much contempt you have for them and their money. They have plenty of other people that they could be spending it on.

Simply ignoring the people who aren’t paying you is going to get you a very bad reputation, very quickly. It doesn’t matter how few people there are in your room. Interact with them and have a good time with them.

Nudity and sex acts should cost money, not getting to know you or talk to you. You’re not being paid by the number of words you speak. Be reasonable about your interactions and it will pay off in the end. Your personality gets them into your room and your body gets their money from them.

As soon as those slow days hit, you’re going to want to get off your cam as quickly as you can. There are more than enough other things that you could be doing with your time. If you’re not making money then there are always dishes to wash and floors to clean.

The temptation to log off is going to be great, but it’s in your best interests to ignore it. Just set a certain number of hours that you absolutely have to be on your cam. Once those hours are up, you can log off, but not before that. You never know when the rush is going to hit.

There’s nothing worse than realizing that you stopped camming right before the money started flowing for all of the other girls. Just put in your time and never make any excuses to stop. Trying to find ways to fill that time with your small number of viewers is what’s going to define you on the cam site.

Find a way to battle through and your true personality will be able to shine. That’s what the people are really after at the end of the day. Just put in the work and you’ll be rewarded.

Be Cute Instead Of Sexual

The best way to fill those hours when no one is tipping is to simply be cute and not sexual. Sexual is what you are when the tips are flowing. If they’re not then you have to turn it off. Switch your strategy and just be as cute as you can possibly be.

That means wearing cute clothes and talking about cute things. You never want to sit there on a slow day and just complain about everything. That’s going to keep the viewers away. If you’re being cute then you might just get people to pay you for it.

Make fun of yourself and be a dork. That’s what people love because it’s approachable and attainable. Just think of yourself as Pam from the office. She may be buttoned up, but she’s off the cuteness scale.

You’ve got plenty of time to make money and don’t let the slow days scare you or cause you to avoid joining a cam platform today. There is a way to make money here and be a successful model. In fact, there are more ways than one. Just stay positive and do as I’ve suggested above and you’ll prosper!

Here are some recommended articles that I think you’ll like. I suggest checking them out at least to see if you can pull any value from them.