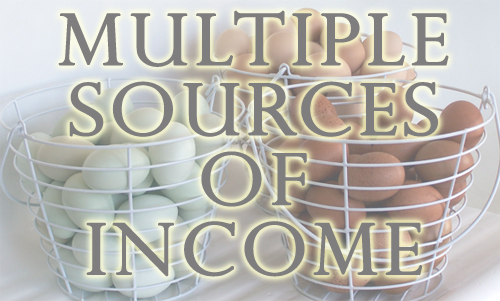 Diversifying your income from Webcam

I consider myself an entrepreneur. In fact, I consider every cam model one. Technically, you are running your own business, and camming on a site is just an extension of that. Sure, it would be easy to log on and cam every day and have that be your sole source of income, and I’m sure that for a lot of models that is the case. There’s nothing wrong with that. However, in my opinion, it is imperative to create multiple sources of income so that you never fall to the trap of depending on a site more than depending on yourself.

Take #Streamgate2015, for example. A day (and by day I mean MONTHS) that will live in infamy for the rest of existence. Streamate glitched and crashed extremely hard back in August of 2015, (and honestly, hasn’t really recovered 100% since then.. But I digress) and guess what happened when the site was barely workable? Models freaked out. They lost their minds. They screamed, they cried, they bitched. They feared for their paychecks and the bills that they owed, yet all of a sudden weren’t sure if they were going to be able to pay. It was a mess.

Don’t get me wrong, I’m not trying to sit up on my pedestal and preach to the masses about why the models shouldn’t have been upset, because trust and believe I was right there with all of them. However, I learned a very valuable lesson. One that I take with me every day in my business, and that is that you can never have too many eggs in your basket.

It was literally the worst feeling when the site that I depended on crashed. It was extremely difficult to stay connected and to make money for around a month. It was terrifying, and there were some days where I ate nothing but ramen noodles, and yes, I admit, my electricity was even turned off. I vowed to myself that would never happen to me again. Sure, you could just start on a new camsite, but it isn’t that simple is it? You have to be approved first, and then you have to wait an average of an extra two weeks to even start receiving any money which, at that time I was not financially stable enough to do. I think I can speak for all of us when I say that it is a scary thing when you don’t know whether or not you’re going to make enough money to feed you and your family.

Part of me actually wants to thank #Streamgate2015 for happening. We survived, we prospered, and hell, my income is better than ever because of what I learned from it. My number one takeaway? Multiple Streams of Income.

I realized that in order for me to never be put into a situation like that again, I was going to have to buck the F*&% up and guarantee my own financial stability. Who knows when something like a site crash could happen again?

First, I started making clips (trust and believe, I absolutely loathe clip making) and right away I started seeing an increase in my passive income. Was it thousands? Hell no. Was it enough to pay a bill or two every month? You bet your sweet ass.

Second, I started a white label…. and then I promoted the CRAP out of it. This took a couple months to see a return on, but now I receive 2-4 checks a month in the mail of passive income from members who spend on other models.

Third, I started investing time now to make money later. By that I mean, I started to spend a lot of time (and I mean A LOT of time) on social media. I didn’t see anything from it for a while, and there were days where I would get so frustrated that I wanted to scream, but then after about 6 months of spending at least 3 hours a day on my social media presence, my ish blew up. In a BIG WAY. I can now take damn near 3 weeks off of cam if I feel like it, and sustain more than enough to pay all of my bills and live comfortably off my snapchat sales alone. (Gain followers, engage your audience, the potential for becoming brand ambassadors, spokespeople, and a brand to be reckoned with is there. You just have to invest your time to see a return.)

Fourth, I picked some model websites that I enjoy and I signed up for affiliate programs to their website. Now I can make money off of their work as well as supporting other models in the industry (which in my opinion, makes for a stronger industry as a whole.)

Finally, after all is said and done I started to take a look outside of the adult industry. Now I’m at the point where I am going to invest. That way I can watch my money make money.

So long story short, here I am, 10 months after #Streamgate2015, and I have so many sources of income hitting my bank account that it take actual effort to keep track of what I get paid and when. I feel completely financially stable, and more importantly 100% in charge of how I run my business. If a cam site isn’t working for me, I don’t stress anymore, I adapt, and the only reason I’m able to do so freely is because of branching out of my comfort zone and making sure that the only business I depend on to keep me financially stable, is my own. My advice to you is for you to do the same.