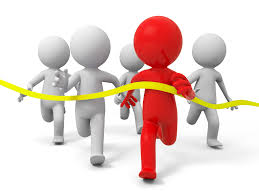 Competition breeds success. I will take that to the bank, even though half of you reading this will probably disagree with me. I suppose it’s a matter of opinion (even though I’m right!)

What am I referring to when I say that phrase? I’m speaking on why it’s OKAY to help out other models in the industry. It’s OKAY to share trade secrets. It’s OKAY to allow them to succeed along with you. It’s OKAY to let people know about camming, it doesn’t have to always be in the shadows.

Woah.. Calm down. I know that a lot of models will disagree with me on that last point. I have gotten into many debates about whether or not camming should stay exclusive and in the shadows of the deep dark interwebs. A lot of you feel as though the more girls that come in and saturate the industry, the harder it becomes to make money. I see why you would think that, and I don’t disagree that the more saturated the industry the tougher the competition. But I can’t help but feel like saying things like “We don’t want more models!” “Great, another documentary that’s going to bring even more competition” and other ridiculous, whiny statements are a cop out. That’s right, I said it. Deal with it.

When did people start looking at competition like it was a negative thing? You think that the top athletes in the world got there by bitching about how there were so many other athletes that were also good at the sport, so it isn’t fair because now they don’t look as good? No, that’s ridiculous. They trained harder, they adapted to the situation, they learned the weaknesses of their toughest competitors and they turned those weaknesses into their strengths. They succeeded because the competition forced them to become better, stronger, faster. (If you’re listening to a playlist, I recommend Kanye’s Stronger for this segment.)

How about McDonalds? You think they worry themselves over how Burger King and Wendys are doing? You’re damn right they do, but they don’t sit there and bitch about it, all of those companies are constantly innovating to come out with the next best thing.

That’s just the way that the cookie crumbles, and for every time a model complains about competition, a fairy loses its wings.

What it ends up turning into is this ridiculous back and forth of models being their own worst enemy and them trying to tear down other models behind their backs. They don’t want any documentaries to come out because they are afraid that a thousand new girls will show up in the cam world and make them obsolete.

How about instead of holding each other down and hoping that the competition isn’t going to be intense, we all start to raise each other up? How about we start supporting each other, giving each other advice, helping each other make money? How about we raise the bar. Because once that bar is raised is when the industry is going to be held to a higher standard all around. You don’t like the guys that come into your room and ask what they can get for $1? If we all created strong competition, only the best would survive, and the $1 guys would eventually be non existent because the girls charging $1 would either work harder to become one of the best, or wouldn’t be good enough to stay in the industry. We set our own standards.

I understand that for some of you, that might sound harsh, and I’m not denying the fact that it is. I’m also not denying the fact that I would rather work in an industry where it’s the top 1% and it is constantly challenging me to improve my craft so I don’t fall behind, then to work in one where I get to stay stagnant and live in a delusional world where I think I’m the best around.

When I first got into the camming industry, I said that I had never met a group of women that were more supportive than my fellow cam models, and I stick by that statement today. Whether that’s because those are the only types of models that I surround myself with or because I am choosing to highlight the positives over the extreme cattiness and sabotage that can also take place… I’m not sure.

What I am sure of is how sad it makes me to see models tearing each other down instead of building each other up. Seeing models complain about not being able to make money because of what someone ELSE is doing. For the love of god ladies, stop being a victim. Realize that if other models are taking your money it’s because you have been out hustled. Work harder to improve and adapt your hustle, or choose a different career because mediocrity shouldn’t exist within a luxury service. Period.

I don’t know about all of you, but I would rather be the worst cam model out of 100 amazing ones, then the best model out of thousands of mediocre.

Let’s innovate together, and help others become the type of models that we all should be. We’ll all make more money in the long run if the bar is set to a higher standard, and the only way to