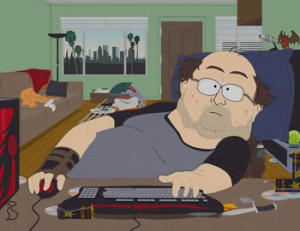 Time wasters and Trolls on Webcam

We all know them and none of us love them. They are the notorious time wasters and trolls that come in and invade our lives and our cam rooms.

We’ll start with the easy. Time wasters are exactly what they sound like. Dudes that come into your room and gobble up your time for free like it’s an all you can eat buffet special. (Excuse me? No free refills here!) They will come in your room and I’ll be honest, some of them are downright friendly as hell. They’ll get you talking and hanging out, and before you know it, a week has gone by. Then, just when you feel like you could list off all of his hobbies in chronological order because he never shuts the F*$# up, you realize…. he’s never spent a dime. Not a single penny. What in the actual hell is life.

I would love to tell you that these are far and few between, but the fact of the matter is that you will probably deal with more time wasters than any other type of person combined. It is, unfortunately, just another part of the job, comes with the territory, so it’s best if you learn how to spot them and nip them in the bud right away.

I find that the easiest way to limit the freeloaders is to explain the rules of your room, or the rules of your show by using the peanut butter and jelly method. Don’t know what that is?
The Peanut Butter and Jelly method is a way to teach people how to do things in the most extremely literal sense possible. Things that most people would omit because they assume that it is common sense, all of a sudden don’t apply.

You do the method by having all the ingredients for a tasty pb&j. Subject A is going to make it while Subject B tells them how.

Subject B: “Get two pieces of bread”

You would think that would be enough, but since Subject A has to take every instruction literally and cannot do anything extra, they have no way to get the bread out of the bag. What Subject B should have said is:

“Untie the twist tie for the loaf of bread. Open the bag. Reach in the bag and grab 2 pieces of bread. Take the bread and lay it on the plate.” It’s the same analogy with listing out what is and what is not acceptable. For example: My public email is set to send an automatic response to every email it receives. The automatic response lists a separate email to send to if they are wanting to book a skype show or order a custom video. It lists out what the email should include and when they can expect a response in return. It also tells them where to go to get merchandise such as my snapchat, posters, panties etc. And different payment options.

I cannot even begin to explain to you how helpful this has been in saving me time and energy. If people aren’t serious about purchasing your product, they probably won’t take the type to type out ANOTHER email to send to a different source, or they won’t go to the site and actually purchase the item. It’s almost like a security blanket to the emails I do receive on my other account. I know that they are sincerely interested because they have taken the time to contact me where it was stated.

The other thing you need to watch out for is when regulars being time wasters. I wish that this never happened, but it does. They will start hanging out in your room, and I honestly think that sometimes they feel like they are your friend so they don’t need to tip anymore. They forget that you’re working. Take it as a compliment, you’re so damn good at hustling these guys that they forget you’re even doing a job! (But even when you take it as a compliment, remind them that they can either pay room rent or they can GTFO)

On top of the horrible time wasters, you can also count on the notorious trolls to come through with their talons, trying to bash everything in sight and leave you in a bloody, guts everywhere, heaping mess on the floor. Sometimes they are so good at finding that one thing that is your weak spot that it’s almost unbelievable.

The only thing that I can really tell you is that you need to develop a thick skin to be a cam model. There’s no way around it, if you are sensitive then they will sense it and they will come into your room, and they will eat you alive. You’ll be curled up in a crying, sobbing mess at the end of the night. You need to grow a pair, build up those walls and keep them reinforced with mother f*%$ing nuclear weapons. You cannot, I repeat, CANNOT give a damn about what other people are going to be saying about you. They will pick on everything, even if it isn’t true. IF you give them a reaction, then you are doing exactly what they want.

If you want to have some real fun with trolls, when they come in your room, play along with whatever they are saying. Turn it around on them so that your entire room is laughing at them. It works surprisingly well. The trolls either leave because you are un-trollable or sometimes (and this is my favorite) they turn into paying customers. Now I’ll drink to that. I’m all about them conversions, baby.

Keep in mind that both time wasters and trolls will always be a part of camming. Without them, we would take for granted the genuinely amazing clients that cross our paths. With them we are stronger and more bad ass bitches who ain’t nothin’ to F*%& with.